By RICHARD A. “RED” LAWHERN

My wife and daughter are chronic pain patients. On behalf of them and others like them, I have spent 22 years moderating social media support groups and analyzing medical literature so non-doctors can understand it. My degree is in engineering, not medicine, though I’ve learned a great deal about pain, pain relief, and health care in the United States.

In the 50+ Facebook groups I support, I hear from people in agony every week. To protect identities, here are some paraphrases from online posts:

Doctors should have gotten the message by now that deserting patients is a violation of medical practice standards, not to mention human rights. But they haven’t. To the contrary, they’ve been hearing about other doctors who got raided by Drug Enforcement Agency swat teams, their patients terrorized, medical records seized, and practices ruined by announcements in local news media. Compounding such brutal tactics, chain pharmacies have compiled high prescriber lists, blacklisting “top prescribing” physicians and denying prescription pain medication to their patients.

Much of the mess described by patients stems directly from the 2016 Centers for Disease Control and Prevention’s “Guideline for Prescribing Opioids for Chronic Pain.” In it, the CDC urged practitioners to avoid increasing opioid doses for new patients above daily doses of 50 morphine milligram equivalents (MME). For patients maintained on doses above 90 MME, doctors were told to conduct and document risk and benefit reviews.

The CDC guideline became controversialalmost immediately after it was published. Despite major criticism, it was widely interpreted by physicians, hospitals, insurance providers, state legislators, medical boards, and the DEA as a mandate for hard limits on prescribing opioids — even for so-called legacy patients for whom long-term or high-dose opioids had already proven safe and effective.

Faced with an outcry over limits on opioids, authors of CDC guidelines acknowledge they’ve been misapplied

Since the publication of the guideline, the American Medical Association, the American Association of Family Physicians, and other organizations have repudiated the science, logic, and conclusions of the CDC guideline and of the DEA’s witch hunt. But nobody in government is listening to medical professionals any more than they are listening to patients.

In November, 2018, the American Medical Association’s House of Delegates issued its groundbreaking Resolution 235. It reads in part:

“… no entity should use MME (morphine milligram equivalents) thresholds as anything more than guidance, and physicians should not be subject to professional discipline, loss of board certification, loss of clinical privileges, criminal prosecution, civil liability, or other penalties or practice limitations solely for prescribing opioids at a quantitative level above the MME thresholds found in the CDC Guideline for Prescribing Opioids.”

In April 2019, under fire from medical professionals across the country, the CDC advised against “misapplication” of the guideline. Writing in the New England Journal of Medicine, three authors of the guideline said it was never intended to become a mandated standard, even though more than 30 states had incorporated it into legislation in the three years since its publication. At about the same time, the FDA issued a safety warning against rapidly tapering individuals off opioids or suddenly stopping their administration, based on known harms to patients.

As many patient advocates said at the time, the CDC and FDA announcements were too little too late. Tens of thousands of patients had already been deserted by their doctors or forced to give up the pain medications that had allowed them to function.

The chronic-pain quandary: Amid a reckoning over opioids, a doctor crusades for caution in cutting back

Physicians have been stepping up their criticism of the CDC guideline and the DEA’s presence in their medical practices. Last month, the American Academy of Family Physicians and five other professional groups representing 560,000 physicians and students called on politicians to “end political interference in the delivery of evidence based medicine.” As they noted, “physicians should never face imprisonment or other penalties for providing necessary care. These laws force physicians to decide between their patients and facing criminal proceedings.”

On June 10, the AMA issued Board of Trustees Report 22 which, among other things, condemns the use of “high prescriber” lists by national pharmacy chains to blacklist high-prescribing physicians and prevent their patients from having pain prescriptions filled. Pharmacies aren’t the only ones using this tactic: Regional U.S. attorneys are also sending intimidating letters to “high prescribers,” warning them that their “prescribing practices may be contributing to the flow of prescription opioids into illegal markets and fueling dangerous addictions.” This claim, however, is not substantiated by medical evidence.

Against this background, there is an inconvenient fact that no one in government wants to hear: almost the entirety of the public narrative that shapes federal and state opioid policy is wrong. Using data published by the CDC itself, a colleague and I have shown that there is no relationship between state-by-state rates of opioid prescribing by doctors and overdose-related deaths from all sources of opioids, including legal or diverted prescriptions and illegal street drugs. In other words, there’s no cause and effect between prescribing rates and overdose deaths — and historical charting of the data reveal that hasn’t been the case in 20 years. 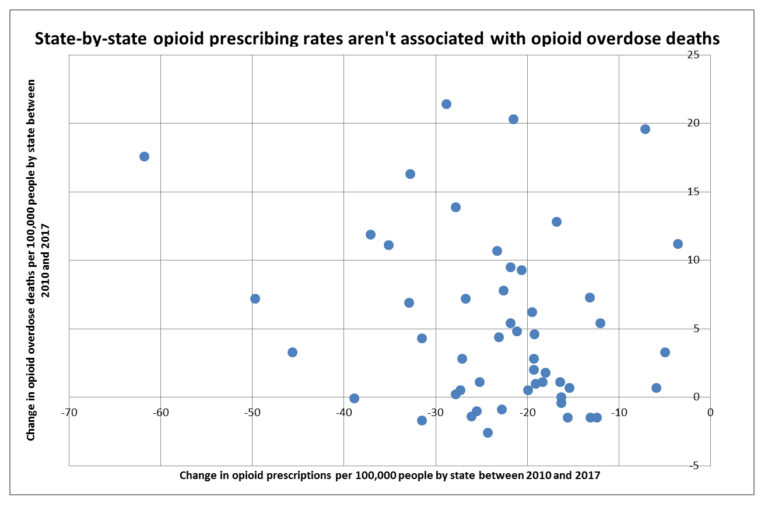 Even as rates of opioid prescribing dropped by 25% between 2011 and 2017, opioid overdose deaths continued to rise.

The central assumptions of government policy regulating medical opioids are directly contradicted by data on prescribing, mortality, and demographics. The implications are profound and obvious: regardless of the greed and misdirection of a few bad apple doctors, government restrictions on prescribing opioids to pain patients are based on mythology, not fact. And overreach by the DEA is destroying tens of thousands of patients’ lives for no good reason. I hear every day the stories of pain patients victimized by over-regulation. You can read some by scrolling through the comments on this STAT article, or this one.

Government policy for opioid pain relievers is now a vast tangle. Patients, families, and their doctors need somebody to cut this bureaucratic Gordian knot and end the madness. That somebody is Congress and the time is now — before governments lapse into even deeper paralysis during the 2020 election campaigns.

It is time for Congress to direct the CDC to withdraw its guideline for a ground-up rewrite by an agency like the NIH or FDA that actually knows what it is doing. Likewise, the Veterans Health Administration must be directed to withdraw its closely related “Opioid Safety Initiative.”Veterans tell me that medical practice standards embedded in the initiative are driving vets to suicide by denying them treatment with opioid pain relievers. Finally, the DEA must be told to stand down and stop persecuting doctors who are legitimately prescribing opioids to their patients with chronic pain for “over-prescribing,” something for which no agency has yet created an accepted definition.

There ought to be a law … and I volunteer to help write it. AMA Resolution 235 (described earlier) must become mandatory policy for all federal health care and law enforcement agencies: the CDC, FDA, NIH, DEA, VA, the National institute on Drug Abuse, and the Department of Justice, to name just a few. Then state-level drug regulators and law enforcement need to be informed of the policy change — pointedly.

It is time to end the madness!

Richard A. “Red” Lawhern, Ph.D., is a non-physician patient advocate, moderator of online patient communities, and co-founder and former director of research for The Alliance for Treatment of Intractable Pain.

← Pain Management Standardization is Needed, Some Experts Say
Haven’t Got Time for the Pain →