“Whoever says the government doesn’t act quickly has never met the Licensing &Certification Program (L&C) within the California Department of PublicHealth.              On July 12 I filed several complaints with the L&C regarding Robert’s respite stay and by July 31 they validated my complaints! (At least a few of them.)Advocacy for the win! (At least a partial win.)

Whoever says the government doesn’t act quickly has never met the Licensing & Certification Program (L&C) within the California Department of Public Health.  On July 12 I filed several complaints with the L&C regarding Robert’s respite stay and by July 31 they validated my complaints! (At least a few of them.)Advocacy for the win! (At least a partial win.) 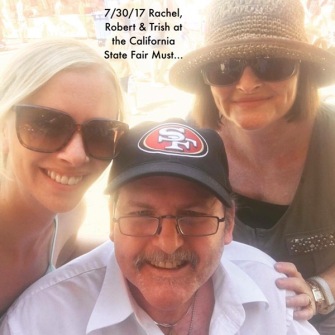 Rach, Robert and Trish (l-r) at the State Fair for some fun.  The investigation involved reviewing my claims, the photos of Robert’s injuries and documentation of the incidents, interviewing me, visiting Gramercy Court (the Skilled Nursing Facility involved), reviewing their files and conducting interviews at the facility.

When I first talked to the investigator, I was not sure how the investigation would go. She started with my first complaint of Robert being injured due to two falls in four days and not being properly watched. Her first comment was that Skilled Nursing Facilities are understaffed and it is unrealistic to expect someone to be watched 24/7.

Are you kidding me? The licensing agency is excusing an SNF because they are understaffed? Isn’t that a problem to be fixed?

Of course, I took a breath before saying anything to her. (I am only a hot-head in my own head.)

Yes, I understood how understaffed SNFs are; however, I think it is reasonable to expect some sort of plan to minimize falls for a person that is a fall risk. I explained Robert is in a wheelchair and needs assistance in transferring and in the restroom. I told the investigator that this was made clear when I admitted Robert to the facility.

She then explained how the investigation works and acknowledged getting my photos and follow-up documentation. She said they will investigate the falls and the procedures the SNF has for preventing them and handling of them if they do happen. She said she will look into why my request for the fall reports was delayed and will investigate the medications issues.

She explained they have no jurisdiction over my getting a refund. I knew that but thought I’d throw it into my complaint. (Oh, by the way, after promising me a refund, Gramercy has not sent me one.)

The investigator explained that I would be told the outcome of the investigation once it has concluded.
Robert is feeling excellent and loving the State Fair!

While she went to work on the case, I kept an eye on Robert’s bruise. It had developed a hard lump under the skin which the doctor was slightly concerned about. The doctor ordered an ultrasound so I kept Robert home from his Day Program and we went to the ultrasound. Robert was having a terrible cluster of seizures that day on top of his ultrasound appointment so that was a not-so-excellent day (contrary to Robert saying it was).

Thankfully, Robert’s seizures eventually stopped and the ultrasound did not show any internal damage, bleeding or clots. One less thing to worry about.

I tried once again to ask for my money back. My email was left unreturned and no one was “in the building” to accept my call.

I knew filing a complaint would most likely result in me not getting my money back but I did not want that to stop me from trying to get changes made at the facility. Robert was only at Gramercy for a short stay so the point of my complaint was to force them to make changes so this does not happen to another resident, whether they are short- or long-term.

When the investigator called on July 31, she explained they found two deficiencies from their investigation.

2. A care plan was not developed after the first fall;

A few days after talking to the investigator, I received their formal letter with their findings. The letter states they completed the investigation and “substantiated your complaint.” Further, “L&C validated the complaint allegation during the onsite visit” and the provider will need to document “their plan/s of correction.”

Yes! I knew they could have done better! Changes will have to be made!

I will make changes, too, when taking Robert for a future respite (although I have soured on that facility so he will not be returning there). I knew admissions seemed disorganized but now I know a few more things to look for when taking Robert in for a respite stay.

This whole thing was a learning experience for me.

I know better than to think the nurses will follow the schedule I have worked so hard to develop with his doctors unless it is included in the doctor’s orders. Robert’s doctor was very upset the nurses didn’t follow my schedule or even question it when it didn’t correspond to her orders.

But I know this! I know this is how they work! I have gone through this before and absolutely should have double-checked that the orders included the medication schedule.

Definitely a learning experience for me.

At the next appointment, I will talk to Robert’s doctor so she knows the nurses will not deviate from doctor’s orders – regardless of information they have from the caregiver. She is a terrific doctor and does so much for her patients and their caregivers and I am sure she will appreciate knowing this and change the way respite orders are written for her patients.

Now that my complaints have been validated, I will try again to get my refund. Not only was the care given not what I had paid for but I picked Robert up early so he wouldn’t continue to be injured! I paid for more nights than he was actually there.

Refund or not, this was a win. A WIN! Changes at Gramercy have to be made because problems were brought to their attention and care for other residents will be improved because of these changes.
Advocacy for the win!”