The U.S. Food and Drug Administration is tapping the brakes on NKTR-181, an experimental opioid pain medication that has less abuse potential than traditional opioids like oxycodone or hydrocodone.

In an SEC filing, Nektar Therapeutics said it received a letter from the FDA on July 23 saying the agency was postponing all advisory committee meetings for opioid analgesics, including one scheduled for August 21 to discus Nektar’s new drug application for NKTR-181.

The FDA was due to make a final decision on NKTR-181 eight days later, but that too is apparently being postponed while the agency considers “a number of scientific and policy issues relating to this class of drugs.”

Nektar called NKTR-181 the “opioid of the future” because it is the first full mu-opioid agonist that can provide pain relief without the euphoria or “high” that can lead to abuse and addiction.

The molecular structure of NKTR-181 is designed to have low permeability across the blood-brain barrier, which slows its rate of entry into the brain.

In a Phase III clinical study, patients with chronic back pain reported that their pain scores dropped an average of 65% when taking NKTR-181 twice daily. Safety studies also found that recreational drug users had significantly less “drug liking” of NKTR-181 when compared to oxycodone. 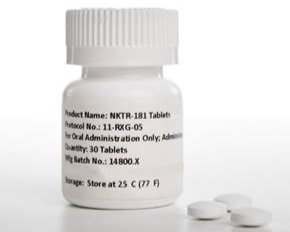 The research was so promising the FDA gave NKTR-181 “fast track” designation to speed its development. Nektar executives told PNN two years ago they were hopeful the drug would be approved in late 2018, with a commercial launch early this year.

Obviously that didn’t happen. And the FDA’s fast track has turned into a slow walk.

Two FDA advisory committees met last month and decided “much better-quality data” was needed before approving any new opioids — even ones with low risk of abuse.

The agency has been under growing public and political pressure to tighten its regulation of opioids. In February, a 60 Minutes report claimed the FDA “opened the floodgates” to the opioid epidemic by approving the use of OxyContin for chronic pain. The following month, the agency received a petition from Public Citizen calling for a moratorium on new opioid approvals because the agency “can no longer be trusted” due to its “poor record” of regulating opioids.

On July 25, Howard Robin, Nektar’s President and CEO, sold 100,000 shares of Nektar for $3.1 million. A spokesman said the sale was previously scheduled due to expiring options. The company’s chief financial officer and a director also sold shares this month. Nektar shares (NASDAQ: NKTR) lost about 10% of their value after the SEC filing was made public.

← Chronic Pain Management Strategies
Getting the Opioid Crisis All Wrong →