Once again, The Chelsea Hutchison Foundation will be rewarding trips to Epilepsy Awareness Day at Disneyland Resort 2017 to families who qualify. The number of trips awarded will depend on the funds raised to support this event and will be announced at a later date. We will start accepting Nominations on May 1, 2017 and will post the Nomination Form then and it can be found on this page under “Files” at the top of the page then. 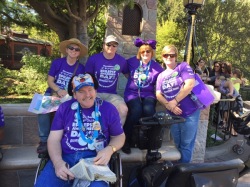 365CaregivingTips.com team with Rich Wright (I added the photo for effect.)

Here are the rules. Please read them carefully. Nominations must be complete and legible.

• Only Nominees with an epilepsy diagnosis qualify.

• Any nominee will be added only once into the drawing. Multiple nominations are not considered. We don’t want this to become a popularity contest. We want everyone to have the same chance to win. Only one nominee entry per household. Previous winners do not qualify, unfortunately.

• Winners requiring airfare will need to be available to fly in on November 6, 2017. Airfare is provided only in the Continental United States. Chelsea’s Wish will provide admission to the EADDL Expo on November 7 (it’s actually free), admission for up to 4* to Disneyland on November 8, 2017 and California Adventure Park on November 9, 2017. (4) nights’ accommodations and airfare will be provided (*Immediate family members to the Nominee only residing in the same residence). If not able to travel by air, you must be able to provide your own transportation and accommodations to and from the event.

You may request a nomination form by emailing ChelseasWish@aol.com after May 1, 2017. Remember, the form must be completed by the nominee or nominee’s parent or guardian if nominee is a minor.

The random drawing will take place on July 16, 2017 in honor of the family who inspired and started funding of Chelsea’s Wish. They lost their son Michael in 2010 and we celebrate Michael’s birthday by holding the drawing on his birthday.

Please know that we have elected to grant these trips through a random drawing. Everyone in this community is so deserving, we could NEVER select one family over another. If you have the means to bring your family on your own, we ask that you not enter so that the families most in need have a chance.