We don’t have an opioid crisis in this country, at least not today. We have a sovereignty crisis, which has led to the flooding of this country with drugs more powerful than anything around even 10 years ago – all promoted by the Mexican cartels and the criminal alien networks allowed to peddle them in sanctuary cities. Yet, for our politicians and the courts, it’s so much easier to make big bad Johnson & Johnson, doctors, and chronic pain patients the boogeymen in order to protect the sacred agendas of open borders and “criminal justice reform,” aka not locking up those trafficking the stuff actually responsible for most of the drug fatalities.

The media and political class celebrated the Monday ruling from an Oklahoma judge ordering Johnson & Johnson to pay $572 million for fueling the “opioid epidemic.” The company is being held responsible even for other companies’ drugs and, of course, the drugs of the Mexican cartels. It’s not even clear who will receive the money. Now who will sue on behalf of the pain patients who are getting their painkillers cut off in order to cover for illegal aliens and drug traffickers?

As I’ve noted in my exhaustive series on the true cause of the drug crisis since 2014, most drug fatalities are from illicit drugs peddled by Mexican cartels. Prescription deaths are down, and prescriptions themselves are seriously limited, more than ever before. To continue declaring war on prescriptions while ignoring the fact that we barely prosecute drug traffickers any more and continuing our reluctance go after the cartels is a recipe for skyrocketing overdoses and harming pain patients.

That’s because, for the most part, it’s not those who are taking pain medication who are overdosing on it, or on illicit opioids. In fact, the fastest-growing drug problem is not even opioids, but cocaine and meth, which are psychostimulants, the opposite of opioids. For a judge to make such a policy pronouncement blaming prescriptions drugs for the crisis is scandalous. As I’ve noted before, most chronic pain patients are older and more are women, while the overwhelming majority of drug fatalities are younger and male.

There is actually a perfectly inverse relationship between the trends in prescriptions and drug overdoses. Total oxycodone ER prescriptions had already decreased by 29.7 percent long ago, around 2007-2011, and decreased 39 percent from 2010 to 2015. Overall opioid prescriptions have decreased a whopping 34 percent from existing plummeting levels just from January 2017 to February 2019 and 43 percent overall since 2011. Prescriptions for high dosage, defined as 90 morphine milligram equivalents or more, declined by 61 percent. Meanwhile, drug deaths have nearly doubled since the end of Obama’s first term, when border and interior enforcement began to collapse, also coinciding with the collapse of drug sentencing in this country.

This graphic from the Alliance for Treating Intractable Pain says it all: 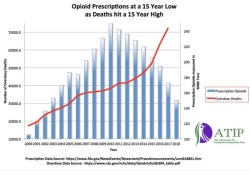 The entire baseline increase in deaths over the past five years had nothing to do with prescriptions and were all from the border and from the illegal alien networks that distribute drugs at the primary level. As Robert Murphy, the DEA special agent in charge of Atlanta, told me earlier this year: “The people coming across the border to make and distribute the drugs are coming here illegally. You can drive all the liquid meth you want here, but you still have to have the people to do it, and they are not coming across at checkpoints; they are sneaking across the border. The people who are here operating the networks are all illegal immigrants.

What the government should be doing is holding the line at our border against the cartels and deporting every single illegal alien in sanctuary cities who is trafficking drugs. As I’ve reported before, DEA agents will tell you that if we busted up the criminal alien networks (they can all be deported without a prosecution), it would become prohibitively expensive for the cartels to peddle these types of drugs at the current prices. Yet rather than going after drug traffickers, illegal aliens, and the cartels, thereby driving down the price of illicit drugs – which is the entire crisis – the politicians at all levels are going after doctors, pharmaceuticals, and pain patients, driving up the cost of much-needed medication for people who are not drug addicts.

The feds just indicted a network of 19 heroin traffickers last week in Oklahoma for bringing in heroin from Mexico. We don’t need another war on drugs. Simply enforcing our existing immigration laws would severely limit the supply to at least pre-2014 crisis levels.

Then there is jailbreak, aka “criminal justice reform.” States barely lock people up for drug trafficking any more, and even the feds are very limited. According to the Bureau of Justice Statistics, the median time served for drug trafficking (not possession) is 17 months. And that is among those who actually serve time. Many get off with probation. Now, both parties nearly unanimously passed a bill providing both front-end sentencing reductions and back-end early release for the worst transnational drug traffickers who are sitting in federal prison, specifically targeted by federal prosecutors as kingpins.

This is no different from their approach to guns and crime. They let out violent felons, including gun felons, and then take away guns from those who need them to remain safe from those criminals the do-gooders let out. They focus on the pain meds or guns while enabling the people who kill with dangerous chemicals and guns.