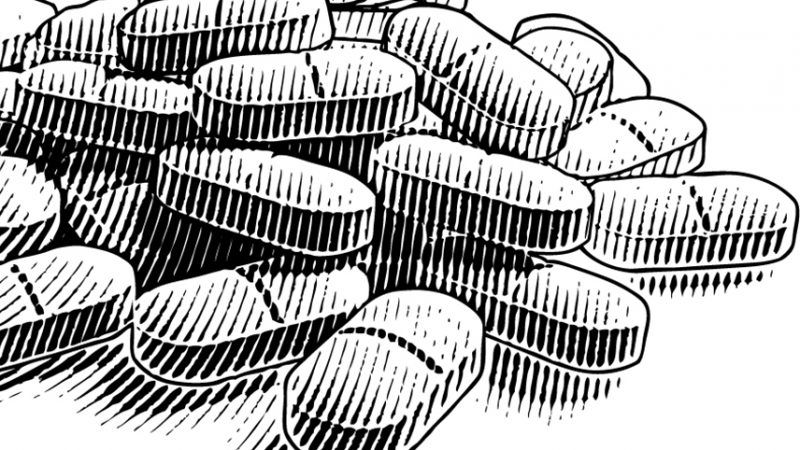 In an effort to “combat the opioid crisis” in America, Congress is calling for a slate of governmental interventions that have been tried, tested, and shown to cause more harm. In June, the U.S. House of Representatives passed 50 bills, with more to come, that throw billions of dollars at already rich universities, hand responsibility for determining addiction treatment procedures to the federal government, and allow the U.S. attorney general to ban vaguely defined substances, among many other clumsy actions. Too much of the new legislation is grounded in the “overprescription” hypothesis, which blames the current unprecedented rates of overdose on an expansion in the number of opioid prescriptions that began in the 1990s. The consensus around this theory has prompted Congress to further restrict opioid prescription access.

In responding this way, Congress is ignoring decades of its own data and a lesson Americans should have learned long ago: When government restricts access to something people want, it drives demand to the black market. In this case, as opioids have become increasingly difficult to obtain legally in the last decade, users have switched to “diverted” prescription medications and illicit alternatives, including heroin. And just as Prohibition pushed bootleggers to switch from beer to potent bathtub gin, traffickers are increasingly adulterating their narcotics with potent synthetic opioids such as sufentanil—a substance that can be up to 500 times stronger than morphine.

Thanks to prescription drug monitoring programs (PDMPs), state-level limits on the number of pills a patient can receive, and Drug Enforcement Administration (DEA) orders to reduce opioid manufacturing, prescription rates are now at their lowest level since 2006. Yet the overdose death toll over the last eight years is at a historic high.

It is true that leading up to peak prescribing, at the end of the last decade, prescription opioids caused the majority of drug overdoses. It also seems likely that the increased availability of pain relievers made prescription drugs more popular among users. (Overdoses from other drugs, such as cocaine and methamphetamine, decreased during this period as users switched to opioids.) But cracking down on those prescriptions not only failed to stem the tide of overdose deaths—it threw the crisis into high gear. The opioid overdose mortality rate has increased by more than 90 percent since 2010.

It’s clear that the black market has claimed the economy ceded by restrictions on the legal market. Data from the National Survey on Drug Use and Health show that pain reliever abuse rates have been flat since 2002. Heroin abuse rates, meanwhile, increased only after opioid prescription rates started to decline.

Looking more closely at the states with the highest opioid death rates (along with Washington, D.C.) brings the problem into focus. Notice on the following chart the sharp increases in fatality numbers that follow legislated reductions in opioid prescribing. That relationship holds throughout the country and becomes more profound as the length and magnitude of opioid restrictions increase. 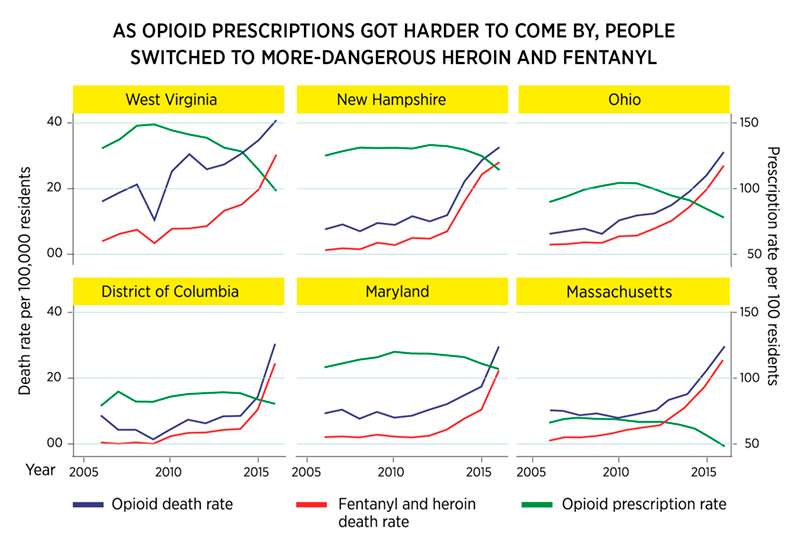 In 2011, Ohio became one of the first states to require doctor participation in PDMPs, which force practitioners to report all opioid prescriptions to an electronic medical records database that can be raided by federal drug authorities* at any time. Prescription rates declined, but the state now has the most opioid overdoses in the country.

Legislators should have noticed the large spike in overdoses and wondered if their involvement was making the problem worse. Instead, they doubled down. Last year, Ohio lawmakers passed a seven-day limit on acute pain medications—meaning no matter what the malady, your doctor can only give you one week’s worth of painkillers.

Obviously, the intention was to stem the overdose epidemic in the state. But preliminary data from the Centers for Disease Control and Prevention suggest that the total number of overdoses in Ohio likely set another national record in 2017.

Despite that failure, Ohio Sen. Rob Portman has introduced an even shorter nationwide limit on acute pain prescriptions—including for all surgeries. If enacted, patients will have to physically show up to their doctors’ offices every three days to plead for a refill. In addition to being an incredible burden on people who are, by definition, already suffering, this policy is unlikely to save any lives: Opioid prescription deaths that are not the result of heroin or fentanyl use have remained constant at just under 10,000 per year since prescription rates started decreasing in 2010.

Members of Congress from Ohio are also aggressively pushing PDMP participation across the country, which risks making that state’s problems nationwide.

The goal of these programs is to stop negligent opioid overprescription, but there is strong evidence that fearful practitioners are now giving people less medication than they need to keep pain at tolerable levels. Although most doctors want to prioritize their patients’ needs, they are understandably willing to sacrifice patient comfort to avoid criminal prosecution, and prescriber infractions are treated differently than most crimes under federal law. The Controlled Substances Act authorizes the DEA to circumvent Fourth Amendment judicial approval and seize PDMP records without a warrant. Oregon* and Utah have both sued to stop this practice, but the courts have sided with the feds, finding that when it comes to highly regulated pharmaceuticals, “physicians and patients have no reasonable expectation of privacy from the DEA.”

Evidence from abroad shows that there are far more effective approaches to dealing with an opioid crisis. In France, policy makers successfully addressed their own overdose epidemic by relaxing regulations on medication-assisted treatment, which combines addiction therapy with less-dangerous prescription opioids like buprenorphine and methadone. The result was a 79 percent drop in overdose deaths in four years. The House Energy and Commerce Committee, however, would not consider legislation that called for similar access.

Congress needs an intervention. Instead of learning from the French experience, and the unanimously positive experiences in other liberalizing countries, lawmakers intend to spend billions of dollars and pile on even more red tape to paper over the conundrums government itself created. America is not alone in grappling with an overdose crisis, yet many of our peers in the developed world are on the road to recovery. We’re still searching for rock bottom.

CORRECTION: The original version of this article named Colorado, not Oregon, as a state that sued to stop warrantless seizure of PDMP records. This version also clarifies that while federal drug authorities can pull those records without a warrant, state and local law enforcement may be subject to different privacy requirements.

← Addiction -vs- Dependence
How Do You Define Pain? →