Here is a recent email I received from my older brother Mark and his wife Susan.  It was so funny I had to share it with all of you hoping to making someone else smile.

“Hello Doctor,
We have a dog here in need of a very fast operation. He has a sever case of Middle Idouse!
Crap, we have not seen that in years! Must be something the owners are doing. 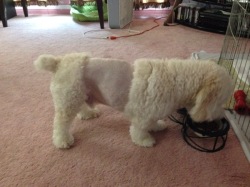 OK, OK, let me make some sharpy marks on him just to make sure we do not operate on the wrong parts.

Scribble, scribble, erase, erase, scribble.
OK, that should do it. Some of my best work if I don’t say so myself. Right nursieeee? 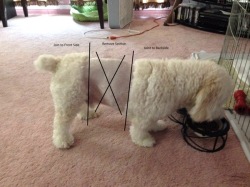 Doctor, the owners said they are OK with the marks made. Go ahead with the operation.
Pet speed.

Nurcieee, please take a picture for the owners after I have made the cuts. I want them
to see just what their spoiling behavior has done to this poor, poor, dog. 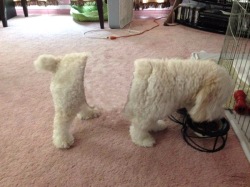 DOCTOR, he is, he is, perfect. You can almost not tell anything was done!! There won’t
even be a scare.

I know, what can I say? They did vote me the most likely to drop out of med school
and become a world class pet-chop-shop owner.

Oh, and nursieeee, remember to tell the owners that he will only need half the food
he has been eating a day.

Jokes over but this is our sense of humor.  Now let me tell the short version of this story.  Mark (older brother) returned from work and Max, the dog in question was in a corner whimpering.  Primary vet, after checking Max out stated they would have to take him to an Emergency Vet Clinic (EVC).  At which time Mark & wife Susan saw really big $$$$$$$’s.  After EVC performed a Cat Scan at $1000, they found out that Max had ruptured several disc’s.  They options were a total of three:

1) Do nothing and leave him in pain and unable to move.

Well, they did the surgery and max is doing amazing.  You now have the $?,000 dollar dog, does he know Steve the million dollar man?  Here are photos of Max a few days of after the surgery.

Great job guys, right move and if there is anything we can do to help, let us know.